When choosing which chords to include in your progression you must first choose a scale and a key within that scale to build your tonic chord. A tonic is the songs first note or chord played which sets the songs sound or mood. The tonic is used as a reference point for the following chords that distance from the tonic, building tension, before resolving back to the tonic. You may use however many chords you require to suit your songs needs. You may also use however many different chord progressions as you want. For example you can have an 8 bar intro that progresses different than the verse.  If your song requires a pre-chorus or a bridge you may choose to start with a different key that resolves back to the songs first key. This can help build tension by changing the mood into something unexpected for the listener.

Roman numerals are assigned to scale degrees indicating that they are to be play as chords and not single notes. You can write a chord progression using roman numerals and use it as a formula to apply to any other major scale with a different set of notes. 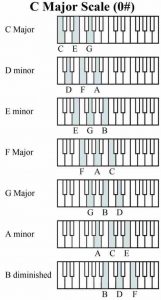 The chord progression we will be using is as follows:

The image below is an example of C major in 1st inversion transitioning into F major root position. 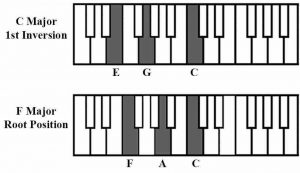 For this exercise you will need to print a copy of the “C Major Scale Piano Chart,” “C Major Scale Guitar Fretboard Chart,” “Blank guitar chords chart” and “Chord progression creator” provided below. If you have a image editing software such as Adobe Photoshop you can use that instead of printing.

c major scale on a piano

Step 1:
On the “Chord progression creator” sheet write the scale you want to use and label the piano keys on the 2 octave piano chart.

Note: C is the first key on the piano and is also the C Major Scale’s major tonic.

Step 2:
On the same “Chord progression creator” sheet write out the notes that make up the 7 basic chords.

Note: Below the note chords written out are the suffix of that chord. The lower case m = minor, the ° = diminished and the rest are Major chords.

Step 3:
Similar to the circle of 5ths write the notes, clockwise, around each circle in the order indicated in the center of the circle.

This part is setup to help you move from chord to chord. By playing the chords, clockwise, around the circle you’ll be able to hear the distance from your current chord to the next.

Do the same for the circle of 3rds, 4ths, 5ths, 6ths and 7ths. The circle of 8ths is only there because a chord progression can be based on octaves or 8 notes above the root of your current playing chord.

When you are finish completing the circles you can then choose any circle and begin playing these chords clockwise around the circle and hear the distance between each chord. You’ll see that each circle progression has a unique sound and feeling.

One thing that you should notice is that if you write a line in the circle from C to D to E to F to G to A to B and back to C you get a unique shape in the circle. The circles with similar shapes have a similar order of chords except in reverse.

When you get a little more advanced you may switch between circles. So if you’re playing the tonic chord and you go up to the 2nd you may then go up to the 4th of the 2nd chord. But as a beginner you should practice playing each chord in order around the circle clockwise.

Rule of thumb: When creating a chord progression you generally want to use 3 certain chords as your tonic. Those chords are the Tonic, Sub Mediant and the Mediant. In this case C, Am & E. If you wish to use any other chord as the first chord in your progression consider using a different scale. Or not! Each Piano scale chart labels the function of each note in a scale. A good chord progression builds tension and always resolves back to the tonic.

Use the “C Major Scale Guitar Fretboard Chart” to help you build each chord. You may also use the chord charts from the chord dictionary to make building chords easier. At the top of each chord add the name of the chord and beside the name add the chords roman numeral. Roman numerals are used to write chord progressions to indicate the position of that chord in the scale. Since C is the tonic of C Major scale the roman numeral for C major chord is I. Lowercase roman numerals represente a minor chord.
I – C
ii – Dm
iii – Em
IV – F
V – G
vi – Am
vii° – B°

In the Chord progression example image you can see what the distance is between each chord. Notice that the verse and the chorus use mostly circle if 4ths while the bridge is compiled with mostly 3rds and starts with a sub mediant chord (relative minor). This is called changing modes. The verse and the chorus are the name progression and start with the scales Mediant (iii). The verse plays for 8 bars then goes into the bridge changing modes then after 4 bars resolves back to the original chord progression.

Below is a sample of what this chord progression sounds like on a beat I just made. You’ll notice that I use and up/down chord progression. For example; from the tonic chord I went to the 4th above the current chord the went down to the 4th an octave down then went back up, etc.

If you’ve done the exercise correctly your blank charts should look similar to the ones below. You may use the charts below to compose your own song.

As you can imagine there are many different possibilities. You can use a different major scale or you can try a Spanish scale. You can even change the type of chords you use so you don’t have to use only triads. I recommend going through the music theory section of this site if you aren’t familiar with scales, chords, circle of fifths or diatonic functions. Good luck with your music creation and hope to hear what you all come up with.

Please disable your adblocker or whitelist this site!