Scales are a group of musical pitches that create a style or a type of sound. Every scale uses a different set of pitches and each pitch is a specific distance from each other. The are many types of scales such as the Arabic Scale, the Pentatonic Scale, Blues Scales, etc. The scales we will focus on in this lesson is the chromatic scale and the diatonic scale as these are the most popular scales in western music used in Pop, Rock, Country and Rap,

The image below is what the diatonic scale ‘C Major Scale’ looks like on a piano.

Lets take a look at the ‘C Major Scale.’ It is named after the scale’s root note which is C. The notes that make up this scale are C — D — E – F — G — A — B – and back to C. Notice the distance between each note. If you apply the formula of the diatonic scale to the note ‘C’ you will get the rest of the notes that this major scale contains. This is true to the rest of the diatonic scales. The all follow the w — w — h – w — w — w — h formula that makes a diatonic scale.

Below is a 12 image gallery of the 12 different combinations of pitches on a piano. 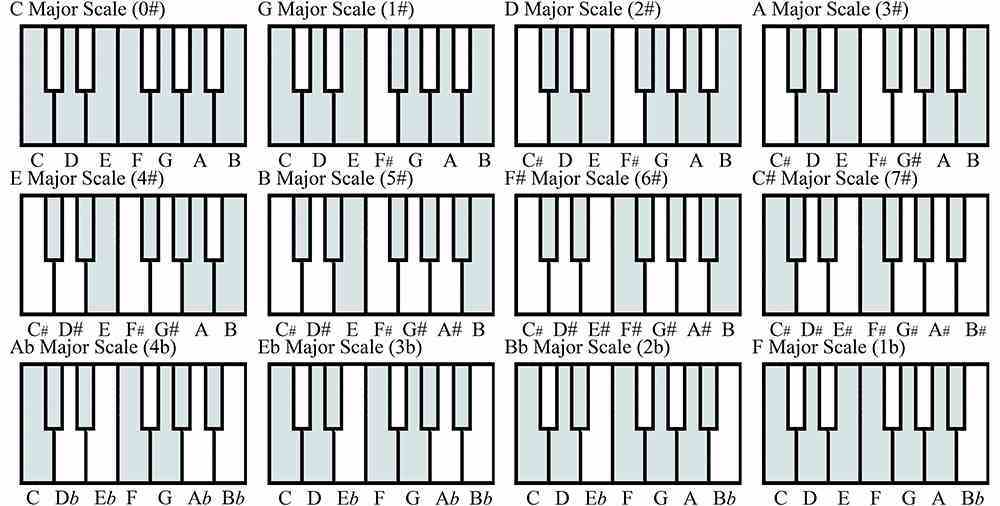 12 diatonic scales on a piano

The blue highlighted keys represent the 7 pitches in that scale. The white keys are excluded and are not to be used in your composition. The gallery begins with ‘C Major Scale’ and as you click the next button you will notice that one by one a note is sharped (#). This means that the pitch of a key is raised up a semitone and one by one every pitch becomes sharped. When you get to ‘C# Major Scale’ you’ll notice that all 7 keys are sharped.

Another important thing to notice is the order in which each key is sharped. The order is as follows: F – C – G – D – A – E – B. A popular way to remember the order in which the notes get sharped is by remembering this phrase; Fat Cats Get Drunk At Every Bar.

When you get to ‘Ab Major Scale’ you’ll notice that the keys begin to descend and one by one each key is flattened (b) until you end up back to ‘C Major Scale.’

Now that we have narrowed down the number of pitches to use per octave you can literally pick any major diatonic scale and play the 7 pitches in that scale randomly and it will sound a bit more musical than it would have using the chromatic scale. So, when you’re composing a song, a good place to start is by choosing a scale to compose your entire song.

Each one of the seven notes in a diatonic scale play a specific role.  This is called the diatonic function.  Knowing what role each note plays can help you build tension with your chord progressions or melodies.  As you already know a diatonic scale begins with a tonic which is the first scale degree.

You can think of the tonic as the sun in our solar system.  The tonic is the most important note while all the other notes are planets that orbit the tonic.  Lets take a look at C Major Scale and the role each note plays.

Tonic – the tonic is the scales most important note as it is the reference point, or starting point, of all other notes.  Building a triad with this note as the root note will give you major chord.  The tonic is where the scale gets its name as well.

Super Tonic – the supertonic is the 2nd scale degree and is a whole step above the tonic.  Building a triad with this note as it’s root note will give you a minor chord.

Mediant – the mediant is a the 3rd scale degree and is the halfway point between the tonic and the dominant.  Building a triad using this note will also give you a minor chord.

Dominant – the dominant is the 5th scale degree and is the second most important note in the diatonic scale (the tonic is the 1st most important).  A triad built off this note is a major chord.  It is the highest point of the scale and creates instability and a sense of continuity.  It is the highest point because the chords that proceed is a minor then a diminished and they lead back into C Major.  A good chord progression will slowly build up to the dominant to build tension that teases the listener.  Once you have reach the highest point it can only be resolved by the tonic or the starting point of your chord progression.  That’s how you create that rollercoaster ride of emotions for your listeners.  The dominant is also the tonic of the following diatonic scale.

Leading Tone – the leading tone is the 7th scale degree.  It is a half step below the tonic.  Building a triad with this note will give you a diminished chord.  It is called the leading tone because it transitions back into the tonic.

Below is a list of all 12 diatonic scales and the function of each note.

Please disable your adblocker or whitelist this site!